From Fargo to Hillsboro, North Dakota: A farming community with a formidable future | ChargePoint

From Fargo to Hillsboro, North Dakota: A farming community with a formidable future 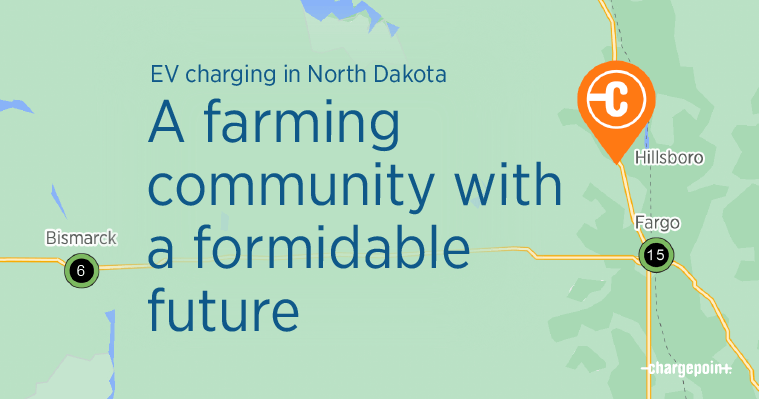 In the first installment of our three-part series on electric vehicle (EV) charging in North Dakota, we traveled to the state’s largest city, Fargo. This time, we visit a slightly less populous place to discover why, in this changing era of transportation, some of the biggest ideas are coming from the smallest places. Hillsboro, a farming community located in the eastern part of the state between Grand Forks and Fargo on Interstate 29, is home to just 1,644 residents as of the last census. What it lacks in size, however, the town is making up for in innovative ideas.

“I'm the president of the city commission, but everybody calls me mayor,” says Terry Sando, who is in his third year of a four-year term. Although he’s lived in Hillsboro for nearly a decade, locals still consider him a newcomer, he says. But being an outsider has its advantages — especially when it comes to outside-of-the-box solutions to old problems and fresh ideas for future economic development.

For example, since beginning his tenure in 2018, Sando has championed Riverwalk Development, a 128-acre community that, when complete, will include 43 residential and six commercial lots, 10 town homes, more than two miles of walking paths and trails, and 10-acres of parks designed to attract new residents and spur economic development in Hillsboro. For Sando, however, planning for a prosperous tomorrow doesn’t stop with housing future residents — it extends to fueling their next cars as well. 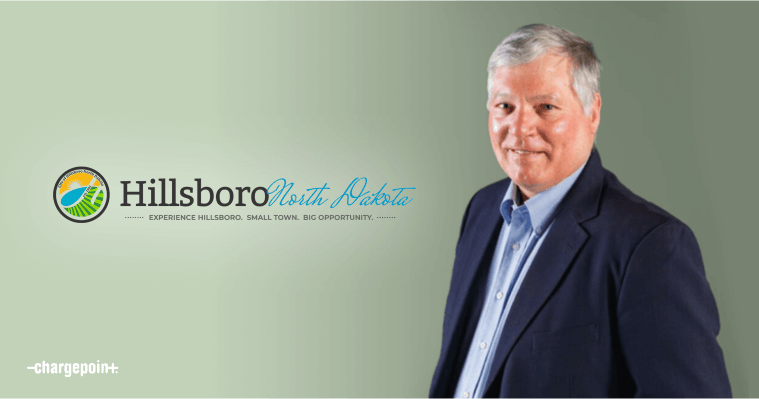 We see [EV charging] as a big opportunity for the city of Hillsboro to really grow. It also helps us to be a destination for some of those Canadian and U.S. visitors who want to get off of I-29.
— Terry Sando, President of the City Commission, Hillsboro, North Dakota

Realizing his town is also optimal charging distance for electric vehicle drivers traveling from Winnipeg to Minneapolis and vice versa, Sando was instrumental in bringing EV charging to the town. The charging stations, a ChargePoint dual-port Express Plus DC fast charger and a dual-port CT4000 Level 2 AC station, are prominently located in Hillsboro’s city center, right outside the town’s sole Subway restaurant. It’s a gathering place for locals during North Dakota’s long winter months — or “meeting season” as it’s colloquially known — and, Sando predicts, a boon for future economic development in the area. “We see it as a big opportunity for the city of Hillsboro to really grow,” he says. “It also helps us to be a destination for some of those Canadian and U.S. visitors who want to get off of I-29.”

From fleets to farmers, everyone benefits from EV charging

It’s not only visitors who will benefit from having EV charging in Hillsboro, Sando says. Electric delivery fleets will be able to take advantage of the fast charging too. He believes local farmers, many of whom are currently skeptical of the new technology, will also come around to EVs for purely practical reasons. “We think it will be something our agricultural community around Hillsboro will start to take a look at because of the simplicity of taking care of an electric vehicle versus an internal combustion engine one. You’re going from around 1,500 moving parts to about 25,” Sando says. “If we can be on the cutting edge of EV charging, as well as new electric agricultural equipment, we think there's a lot of opportunity for economic development here in Hillsboro.” 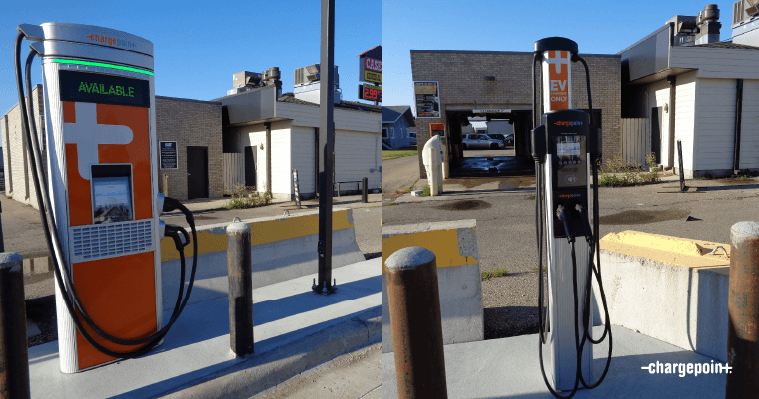 If we can be on the cutting edge of EV charging, as well as new electric agricultural equipment, we think there's a lot of opportunity for economic development here in Hillsboro. — Terry Sando, President of the City Commission, Hillsboro, North Dakota

Looking ahead to a bright future

Hillsboro is certainly ahead of most towns its size when it comes to EV infrastructure, but that should soon change as EVs become more prevalent and states continue enacting ever-more ambitious sustainability and climate commitments. This past May, North Dakota’s governor, Doug Burgum, pledged to make the state carbon neutral by 2030. It’s a noble goal and one that has the advantage of attracting young talent to a state not previously known for its innovations. Technology professionals, no longer tethered to offices following the recent pandemic, are finding a lot to like about North Dakota, and they’re relocating there in droves. The state currently touts the lowest long-term unemployment rate in the nation.

“Hillsboro is looking to grow and there are certain amenities needed for our younger generations to want to locate into Hillsboro,” Sando says, noting that there’s talk of replacing the town’s six-decade-old swimming pool with a new pool and wellness center. “That would be another perfect spot for EV charging,” he says.

Like many people from the Upper Midwest, Sando is quick to give credit where it’s due, including to those who helped him come up with the idea of bringing EV charging to Hillsboro in the first place. One of those folks is Paul Jensen from the energy consulting firm Green Ways 2Go. Sando traveled with Jensen to Norway in 2018 along with Fargo parking commissioner Mike Williams and 12 others to discover how that country became No. 1 in the world for EVs. Jensen also recommended ChargePoint.

“It was the relationship Paul had with the city of Hillsboro that really pushed us toward ChargePoint,” Sando says, crediting Green Ways 2Go with helping Hillsboro take advantage of the incentives that ultimately made the installation a reality. “Paul did a great job of making us aware and was a great facilitator as far as being able to bring ChargePoint to Hillsboro,” he says.

What’s next? Sando says he’s considering purchasing the new all-electric Ford F-150 Lightning for the city when it becomes available next year to further advocate for EVs. We’ll let you know as soon as that happens.

Next up in our North Dakota series we head to Bismarck to find out how EV charging is impacting the state capital.

From Norway to North Dakota: Fargo puts EV charging on the map in the Upper Midwest