Campbell, Calif. ChargePoint – the company with the nation’s largest and most open electric vehicle charging station network – today released a list of the Top 10 Regions with the largest growth of electric vehicle sales. The rank is based on percentage of growth from quarter 3 to quarter 4 of 2013 and numbers were retrieved from states’ motor vehicle departments.

While the Los Angeles region has the largest number of EV sales in the fourth quarter (over 5,000) and the highest number of EVs total (27,411), Atlanta, with sales of over 3,000 in Q4, led the nation with a 52 percent increase, followed by Washington D.C. with a 21 percent growth. Portland came in third, just slightly above Los Angeles with the Bay Area, San Diego, Chicago, Seattle, Miami and Detroit following close behind.

“Popularity is increasing because drivers know there is a robust network to charge their cars and nearly every major automaker is coming out with a cool new EV,” said Pasquale Romano, CEO of ChargePoint. “The electric vehicle market is no longer just growing in California’s metropolitan areas - EV adoption is happening across the nation. We’re well on our way to having twice the number of EVs on the road by the end of 2014.”

Ten Regions with the Largest Growth of EV Sales in 2013* 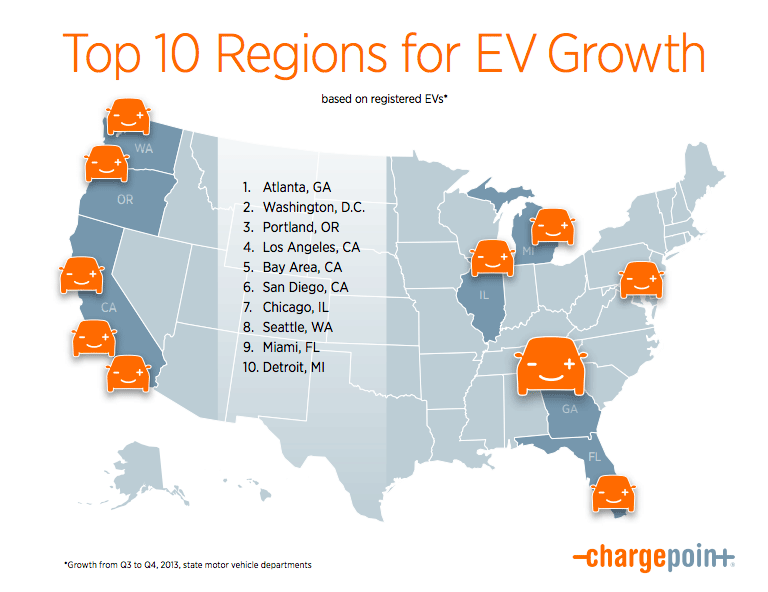 ChargePoint is the largest and most open electric vehicle (EV) charging network in the world, with more than 15,000 charging locations and a 70%+ market share.  Ranked #1 by leading independent research firm, Navigant Research, ChargePoint makes advanced hardware and best-in-class cloud based software. ChargePoint’s open network is utilized by many leading EV hardware makers and encourages all EV charging manufacturers to join.

ChargePoint’s real-time network information including the availability of charging locations throughout the nation is available through the ChargePoint mobile app, online and via the navigation systems in top-selling EVs including the new BMW i3 and the Nissan Leaf. Every 10 seconds, a driver connects to a ChargePoint station and by initiating over 3.7 million charging sessions, ChargePoint drivers have saved over 2.6 million gallons of gasoline and driven 65 million gas free miles.