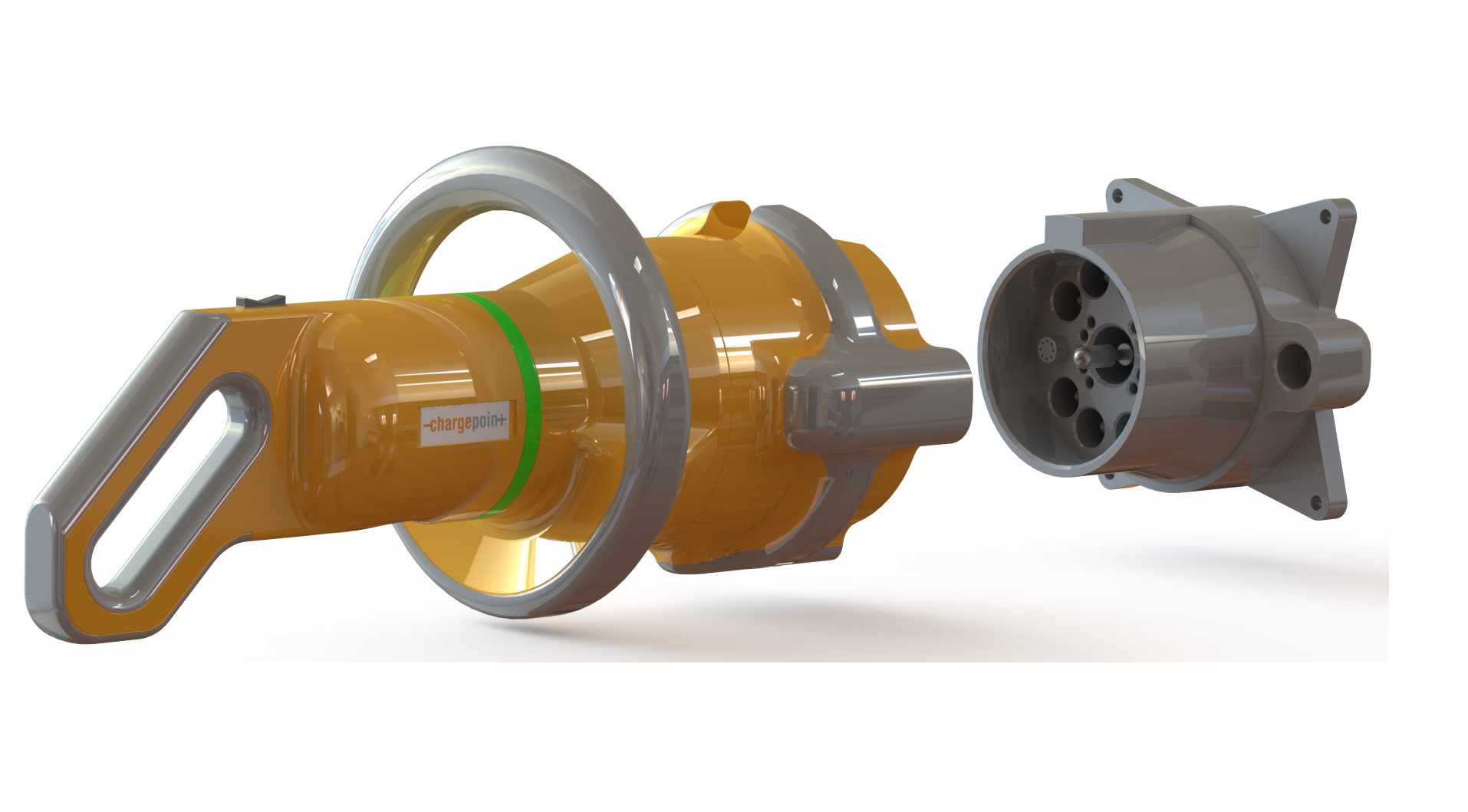 Los Angeles, Calif. (USA) – May 9, 2018 –ChargePoint, the world’s leading and most open electric vehicle (EV) charging network, today revealed a first-ever concept design for two megawatt, high-powered charging of electric aircraft and semi-trucks, including electric vertical takeoff and landing (VTOL) aircraft. As the charging partner for Uber Elevate, ChargePoint made the announcement at the second annual Elevate Summit, which took place May 8-9 in Los Angeles.

The concept design provides a proposal for high-powered charging applications while generating a conversation around a common industry connector as the transition to electrified trucking fleets and the introduction of electric aircraft ramps up in the years to come. Uber plans to roll out to its first Elevate markets (Los Angeles, Dallas and Dubai) as early as 2020. Analysts predict that at least 15 percent of global truck sales will be electric by 2030, with the cost of electric trucks expected to reach cost parity with their diesel counterparts by 2025(1). Aircraft manufacturers are already exploring electric propulsion for a number of use cases which could save the industries hundreds of billions of dollars annually.

“The drivetrain debate has ended and electrification has won out as the propulsion method of choice across transportation categories, as evidenced by the growing interest in electrifying semi-trucks, aircraft and beyond,” said Pasquale Romano, President and CEO, ChargePoint, Inc. “Revealing a new concept design for high-powered charging at the second Elevate Summit is appropriate as the Uber team prepares to get Elevate off the ground in a few short years. The new designnot only provides a first look at a common industry connector that can provide benefits to the manufacturers and operators of electric semi-trucks and aircraft, but is a catalyst for an important conversation in the industry. ”

Many of the charging requirements are similar across heavy vehicle transportation categories. Electric semi-truck and aircraft have the same power requirements and both require high-powered, fast charging. The shared requirements create an opportunity for a common connector, and the benefits are clear: a shared connector will help reduce complexity for manufacturers, drivers and pilots; bring down costs; and create greater economies of scale.

"Uber is proud to work alongside the ChargePoint team, an industry leader in designing charging solutions suitable for eVTOL charging,” said Celina Mikolajczak, Director of Engineering, Energy Storage Systems at Uber. “ChargePoint brings unparalleled experience in safety, reliability and understanding human factors, resulting in robust connector and charger designs. A proven track record in developing and deploying automotive EV charging systems at scale gives us confidence that ChargePoint can develop and deploy world-class aircraft charging systems, which will one day operate on skyports."

The ChargePoint engineering team focused on several key elements in developing the new design. To meet performance requirements, up to four BMS interfaces and four 500-amp delivery circuits are needed. Each delivery circuit will have a voltage range from 200 to 1000 volts. To facilitate autonomous data and vehicle performance payload offload, a provision for high speed data transfer was also included. Designed to be used in heavy vehicle applications, the connector must be rugged and able to withstand the rigors of frequent use, while also being easy to insert and remove. A motorized system aids in the insertion process, while rugged construction protects against drops and rough maneuvers common in heavy-duty fueling. The connector also supports optional auxiliary liquid cooling to the aircraft or semi-truck while it’s being charged and is designed to be operated either manually or robotically.

Since 2017, ChargePoint has been the charging partner for Uber’s Elevate initiative, as the two companies explore innovations to help support the launch of a fleet of electric VTOL aircraft within five years. Leveraging Express Plus, ChargePoint’s ultra-fast charge platform, the company continues to develop designs specifically for use at skyports where VTOL aircraft will park and fuel as part of their day-to-day activities.

Last year,Uber announced that the first U.S. Elevate cities would be be Dallas-Fort Worth/Frisco Texas and L.A. with a goal of flight demonstrations in 2020 and Elevate commercially available to riders in 2023 in those cities. To make uberAIR a reality, Uber has entered into partnerships with several highly experienced aircraft manufacturers who are developing electric VTOL vehicles including: Aurora Flight Sciences, Pipistrel Aircraft, Embraer and Bell Helicopter. Last fall, Uber signed a Space Act Agreement with NASA for the development of new Unmanned Traffic Management concepts and Unmanned Aerial Systems that will enable safe and efficient operations at low altitudes. To help create skyports for the uberAIR network, Uber has also entered into real estate partnerships with Hillwood Properties and Sandstone Properties. Uber’s analysis projects that an electric vehicle will travel at a speed up to 200 miles per hour and that after several years in a market an Uber Elevate ride will cost the same as an UberX trip of the same distance.

For more information about the 2018 Elevate Summit or to tune in to tune in live online, visit https://www.uber.com/info/elevate/summit/.

Images of the High-Powered Connector Concept can be found here

ChargePoint is the leading electric vehicle (EV) charging network in the world, with charging solutions in every category EV drivers charge, at home, work, around town and on the road. With more than 48,000 independently owned public and semi-public charging spots and thousands of customers (businesses, cities, agencies and service providers), ChargePoint is the only charging technology company on the market that designs, develops and manufactures hardware and software solutions across every use case. Leading EV hardware makers and other partners rely on the ChargePoint network to make charging station details available in mobile apps, online and in navigation systems for popular EVs. ChargePoint drivers have completed more than 37 million charging sessions, saving upwards of 36 million gallons of gasoline and driving more than 868 million gas-free miles. For more information, visit www.chargepoint.com or contact the North American press office at media@chargepoint.com.