Things could have turned out differently. Over a century ago, when automobiles were first becoming a viable means of moving people and goods around, there was a debate raging about how best to power them. It came down to three competing fuels: steam, gasoline and electricity. We know which of those technologies won out that time around, but the story of how we got from there to here offers some valuable insights. While there is now no doubt electricity will propel the next generation of cars, trucks and buses into a brand-new era of mobility, it pays to look back at what might have been — especially now that we have a second chance to get it right.

Steam power, which by the 1880s had been around for well over a century, was time-tested for moving massive locomotives and, later, ships. So why not cars? Steam-powered cars did have some success in early “races” pitting them against internal combustion engine (ICE) vehicles and electric vehicles (EVs), but they required a steady diet of coal and water, making them too complex, too labor-intensive and too dangerous to power any future consumer product (as many unfortunate souls sadly found out). One fuel down, two to go.

Gottlieb Daimler didn’t invent the internal combustion engine, but he was the first one to modify it and attach it to a vehicle. His 17-year-old son, Paul, took that vehicle — a bicycle — out for a six-mile spin in November 1885, making him the first person in history to don a leather jacket, get his motor runnin’ and head out on the highway (probably). But it was fellow German engineer Carl Benz who built a tricycle specifically designed around an internal combustion engine who was credited with inventing the first automobile — the Motorwagen — which he patented in January 1886.

While history remembers Daimler and Benz, it was actually a few years earlier, in 1881, that French inventor Gustave Trouvé had successfully tested a tricycle fitted with a rechargeable battery in Paris. Unfortunately for Trouvé, he was unable to patent his electric vehicle, and it was yet-another German engineer, Andreas Flocken, who received credit for the invention of the first EV in 1888.

Some of the early criticisms of electric vehicles were eerily reminiscent of those the naysayers would levy against the future generation of EVs more than a century later. They said the battery technology of the day was too inefficient, that EVs took too long to charge and their range (around 30 miles at the time) wasn’t sufficient. Sound familiar? Except in a world in which few had ever traveled more than a handful of miles from their homes and the idea of personal transportation hadn’t yet caught on, the very definition of mobility itself was still up for grabs. And one EV company set out to define it... with disastrous results.

From superiority to sidenote

Albert Pope, the founder of Pope Manufacturing, began producing his electric Columbia automobile in Hartford, Connecticut, in 1896. The following year, the Columbia outsold both gas and steam cars. Unfortunately, that would be the vehicle’s heyday. In 1899, at the behest of New York financier William Whitney, Pope teamed up with inventors Pedro Salom and Henry Morris, who were running a thriving EV taxi service in New York City. The pair’s so-called Electrobats relied on a clever battery-swapping scheme to keep them operating throughout the day. It should have been a match made in heaven.

The new venture, the Electric Vehicle Company (EVC) had big expansion plans. Between 1899 and 1901, EVC was the largest automobile manufacturer in the United States. Outside of NYC, however, EVC’s East Coast operations were mismanaged, leading to bad press and accusations the company was ripping off investors. The share price plummeted, and ICE vehicle manufacturers pounced. Pope eventually went bankrupt. EVs were down but not quite out. In fact, they nearly got another lease on life thanks to a couple of very big names. 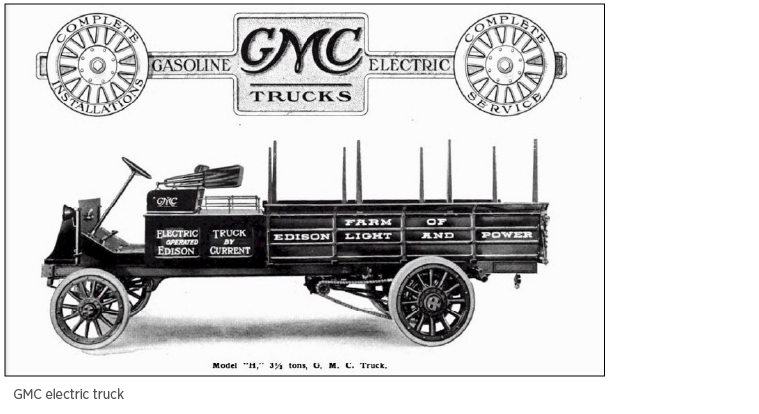 In 1896, not-yet-famous Henry Ford was working as the chief engineer at Detroit Edison Illuminating Company and experimenting with ICE vehicles in his spare time when he met his boss, the then-legendary Thomas Edison. Edison was impressed with Ford’s plans for a gasoline car and encouraged the budding entrepreneur to follow his passion. Ford left the Edison Company in 1899 to start the Detroit Automobile Company and, later, his own eponymously named Ford Motor Company in 1903. The rest is history... but it almost wasn’t.

The low-cost EV that wasn’t

Despite sending his protégé off to work on ICE cars, Edison began having second thoughts about electric vehicles. He’d been looking for opportunities to sell his newly invented nickel-iron batteries and imagined them one day replacing the heavier lead-acid batteries then used in EVs. He reached out to Ford (who had remained a close friend), and the pair began secretly working on a low-cost electric car using Edison’s batteries. Word eventually got out, and Ford confirmed the plan to the New York Times in early 1914.

It was rumored that the “Edison-Ford” would get between 50 and 100 miles on a single charge and cost between $500 and $750 ($14,312 and $21,468 today). Unfortunately, after several delays, Ford engineers simply couldn’t get the nickel-iron batteries to work as hoped and began plotting to swap them out for the less-efficient, more reliable lead-acid ones instead. When Ford found out, he became apoplectic and scrapped the project entirely. That, despite having already sunk a small fortune — $1.5 million (nearly $40 million today) — into the endeavor. As the ghost of our friend, Gustave Trouvé, might have whispered, “C’est la vie.”

The success of the internal combustion engine was never a foregone conclusion. Far from it. Given that electric vehicles were cleaner, quieter, more reliable and easier to operate, they had the early advantage — especially for fleets. Around the turn of the 20th century, cities around the world were relying on electric vehicles to shuttle passengers, deliver goods and fight fires. A New York Times headline from 1910 exclaimed, “Growth of Electric Commercial Trucks: Efficiency and Economy of Vehicles Forcing Men to Supplant Horse-Drawn Wagons.” The article noted that EVs reduced “haulage” costs by 15% to 40% — over horses!

In the end though, Ford went on to revolutionize mass production and made affordable gas-powered cars that, for better and worse, changed the relationship between people and mobility for generations. Imagine if EVs had won out? Humanity would have a century’s worth of battery and charging innovations under its belt. We probably wouldn’t be facing a dire climate crisis either, and people would likely be healthier and happier as a result. Had it not been for the failures of EVC’s management, the lack of transparency amongst Ford engineers and Henry Ford’s own ego, we might be living in a world more “Fifth Element” than “Mad Max” today.

Automakers, businesses and fleets are currently investing billions of dollars to accelerate vehicle electrification to meet consumer demand, fulfill sustainability commitments and adhere to government climate targets. Drivers can finally fuel where it’s most convenient for them — where they live, work and play — rather than driving out of the way to fill up with a toxic, nonrenewable, polluting substance that must be stored far from any of those places. Modern electric cars have been embraced by every traditional OEM, including the Mercedes-Benz Group (formerly Daimler-Benz) and Ford Motor Company. How often do we get a second chance? We have one now and, since 2007, ChargePoint has been committed to getting it right this time.

Today, transportation is going through the single biggest transformation since the invention of the Model T. Have you ever dreamed of working for an innovative company that’s helping change the world for the better? ChargePoint is hiring.