Dogs of ChargePoint: The Pupdate 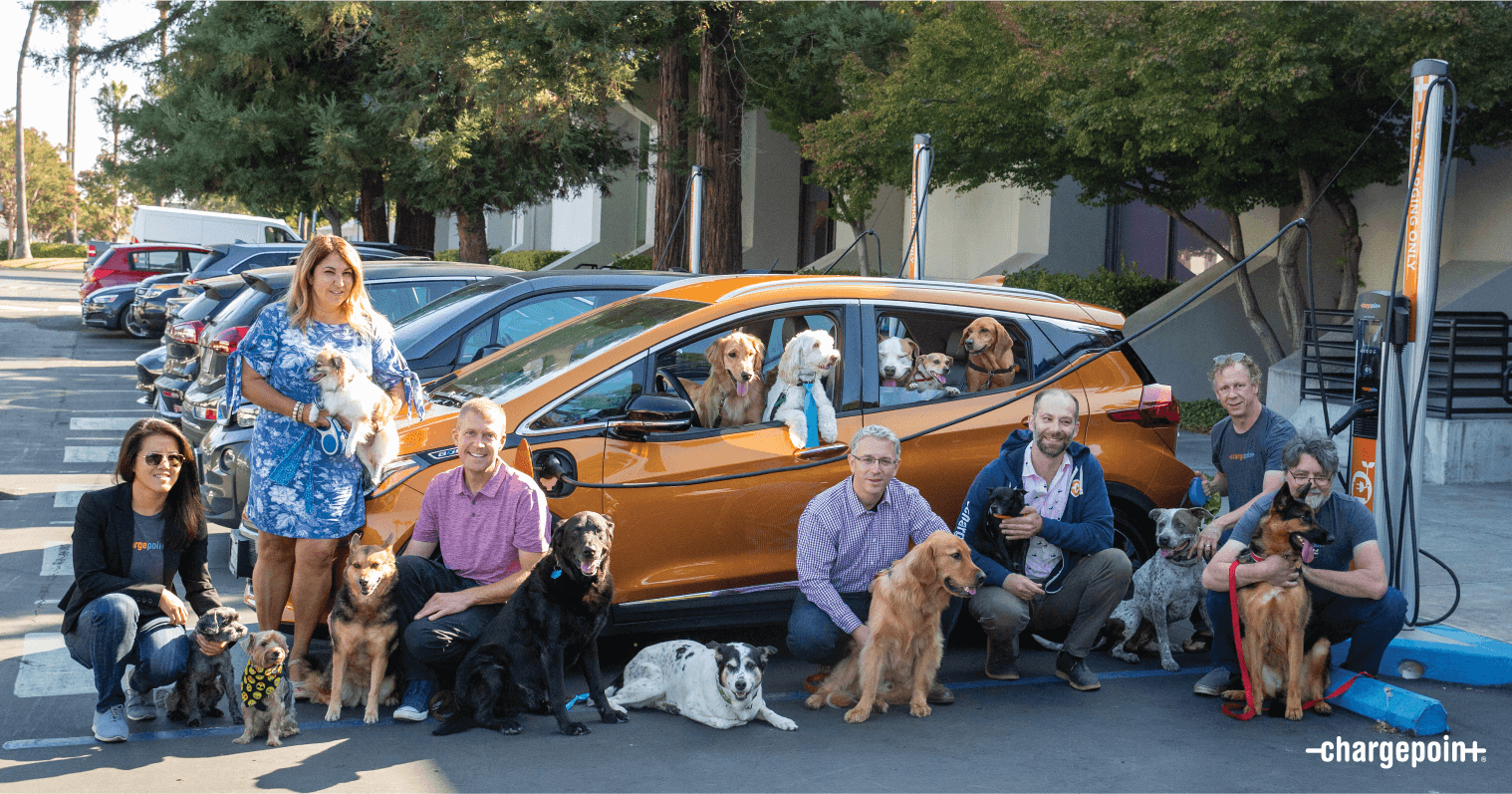 Last year, we introduced you to some of the dogs of ChargePoint who, along with the rest of our incredible team, make this such a fun (and furry) place to work. We’ve grown a lot as a company since then, and with that growth comes more people—and more pups! This pupdate post introduces you to some of the doggos who’ve joined our team in the last year or so. Woof them your best welcome!

Brindle French Bulldog Bella joins her brother Blue (say that five times fast) in the marketing department. Smaller and quieter, she nevertheless shows Blue who’s boss, not to mention makes big contributions to the team (is she the mastermind behind all of our blog posts? We'll never tell). Bella rides in a Model S with (little) Blue.

(Big) Blue is a sweet, energetic yet chill, curious, all elbows and muscles Pitt-Heeler mix, who likes to think he is a small cuddly lapdog and really has no body sense.  He likes to herd small animals, such as children and cats (when they aren’t napping on his head while on the couch), can turn any soft rope-like toy into a weapon of mass destruction before reducing it to atom-sized particles and is usually the fastest dog at the dog park. Blue hates doorbells and when we yell "they're here!!!!" Oh yeah, he has terrible gas and a head wider than some small countries. He responds to Blue Bell, Blu-ishious and Blucifer on occasion. Blue rolls in a 2013 Nissan LEAF.

Rough and tumble Bruno would drive the upcoming Rivian pickup, while his sister Bianca is the right size for the already-available electric Mini.

Denali is a gentle giant who loves being pet by any human who is willing and is indifferent toward other dogs. He thinks very highly of himself, always sits with his front paws crossed and is usually never without his stuffed gator toy. Denali drives a Tesla Model X because it's roomy and advanced enough for his luxury taste.

Dapper Hunter is dressed for success, in the office and at the dog park.

Hey, I’m Jack Bower (my dad named me). I also work from home with my momma Angela and sister Stella (meet her below). I was adopted in Nashville from a family who couldn’t handle all my toughness. I’m small and old, but I’m super TUFF! I fight off terrorists (mailman) and bad guys (UPS guy) daily... but I’m deathly afraid of fireworks. ? 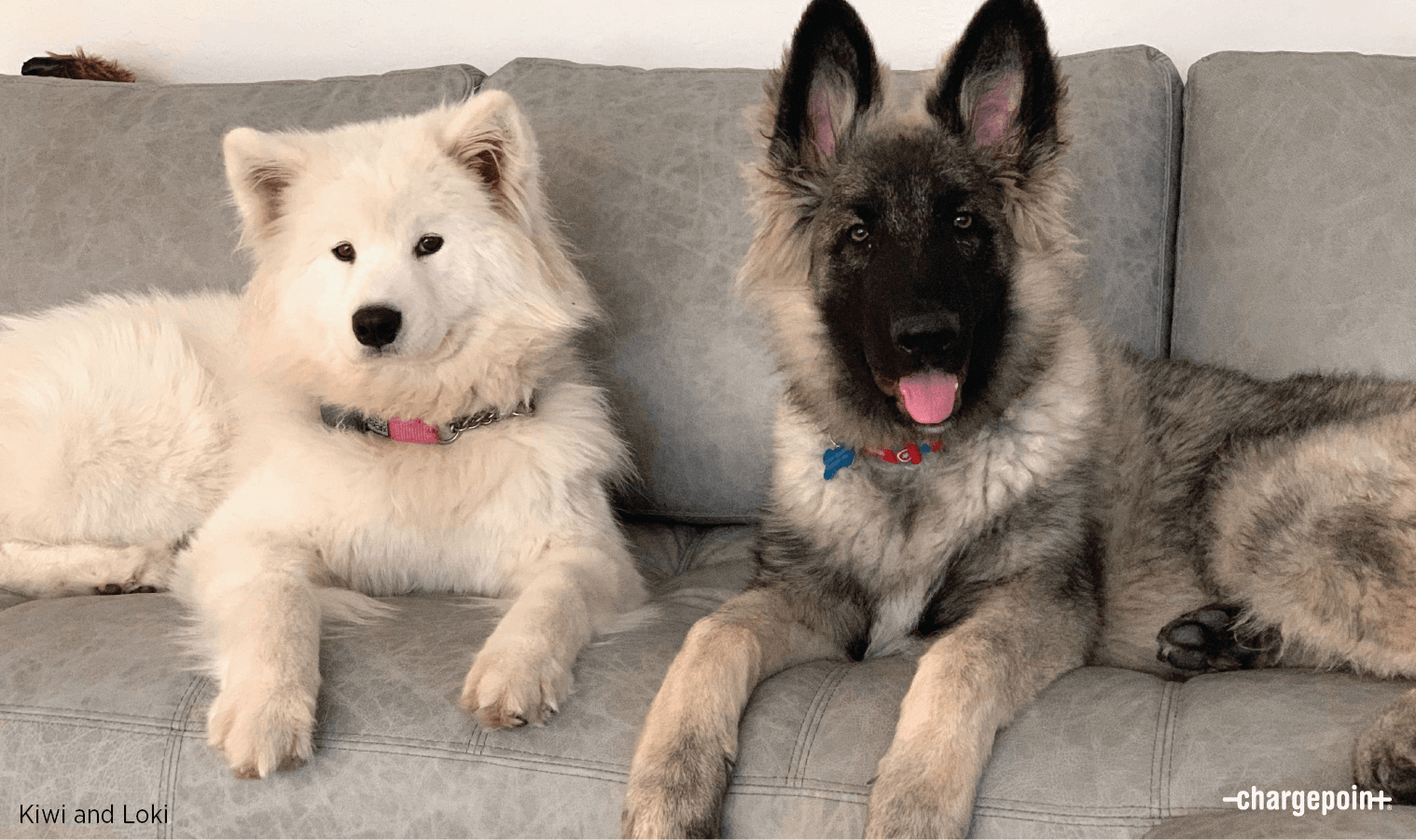 Kiwi and Loki are best buds. Loki started out small, but grew from 15 pounds (solo, above section) to 55 pounds (with Kiwi, just above) by just 4.5 months. He just might need a Tesla Semi to cart him around soon.

Kobe is drinking the ChargePoint Kool-Aid, er, coffee, at our Scottsdale office. He made his down payment on the new Rivian electric truck using his birthday money. Good boy, Kobe!

Koda and Mona were too busy napping to comment at press time.

Pepper lives in Scottsdale, Arizona, and is currently holding down two jobs. By day, she’s working for treats and cuddles in the Inside Sales department at ChargePoint. On nights and weekends, Pepper is training to become a therapy dog at the local children’s hospital! Pepper's hobbies include hanging with her big dog brother, Leo, going on car rides, hanging out at dog-friendly restaurants and, of course, going to the park (my hoomans call it the dog park?).

Princess is a surrogate pup who comes to hang out with the Tech Pubs/Training/Localization team when her “real” momma is traveling for business. She’s all ears when she knows it’s going to be a ChargePoint day, and who can blame her? She gets high fives before heading out to the office, her own office chair with soft bedding, and cold water/treats delivered right to her nose.

What, me, lobby? Yes, actually—behind these sweet eyes is a fierce dedication to promoting EV-friendly legislation. Ruby fights doggedly every day to make sure there is a smooth path forward for electrification everywhere. (Pay no attention to the bar in the background. That’s for the humans.)

Siku works out of our Arizona office and loves making trips to Sedona in a 2017 Chevrolet Volt.

My name is Stella and I work from home with my momma Angela. I am the world’s most friendly dog. I love everybody despite being left out on the streets for many years, fending for myself and being a shelter survivor. Now I nap on comfy beds in an air-conditioned home where my momma makes me homemade meals. (Brother: Jack Bower.)

When Swayze is not on the dance floor, she is supporting the policy team from her remote location in Denver. She prefers using pedal power to cruise around the Mile High City, hitching rides behind a 1983 Peugeot.

Adopted on her 1st birthday, Willow enjoys being chauffeured to work in a Volkswagen e-Golf. Her passions are laser pointer, ball toss and tug-of-war. Willow really loves being around children and will play all day with them if she can.

Meet Winnie, ChargePoint’s first London dog. At four years old, she doesn’t look a day older than three. She loves snacks, sunbathing and chasing birds in the park. Her pet hate is cats, of course! Winnie is driving a Golf right now, but eagerly awaiting her Model 3—only 8 months to go!

Yasmin Imogen drives the Jaguar I-PACE because she’s even fancier than her mom, a Model S driver. 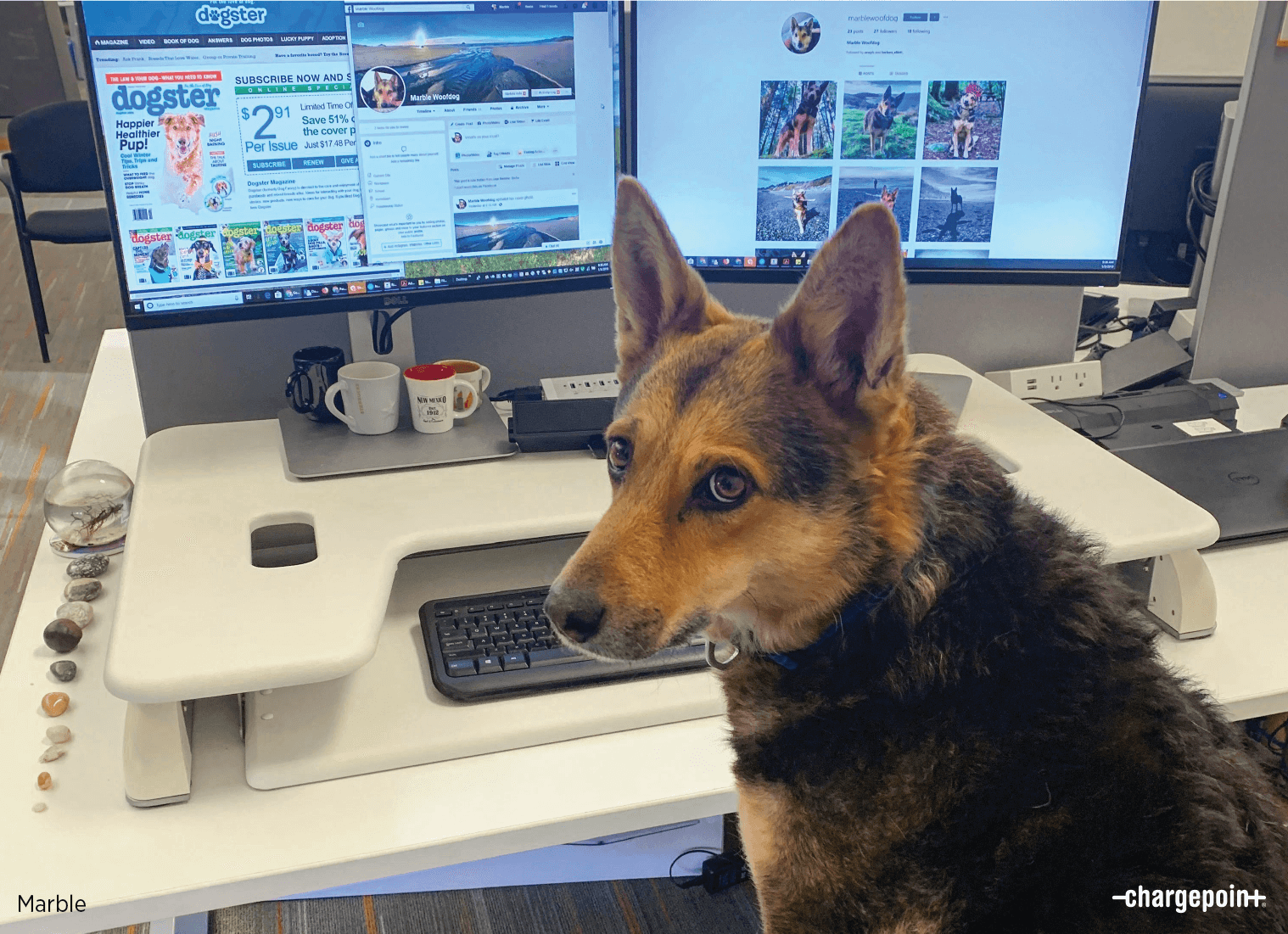 ChargePoint recently welcomed the Dumb Friends League of Denver as a new customer that is offering (smart!) EV charging at their animal shelter. Some of us might argue that our dogs are smarter than we think, while others have pups with more moderate IQs. No matter their gray matter, we still love ‘em. Do you think you have what it takes to work at a paw-some place like ChargePoint? Join Marble (above) in IT or find your fit: