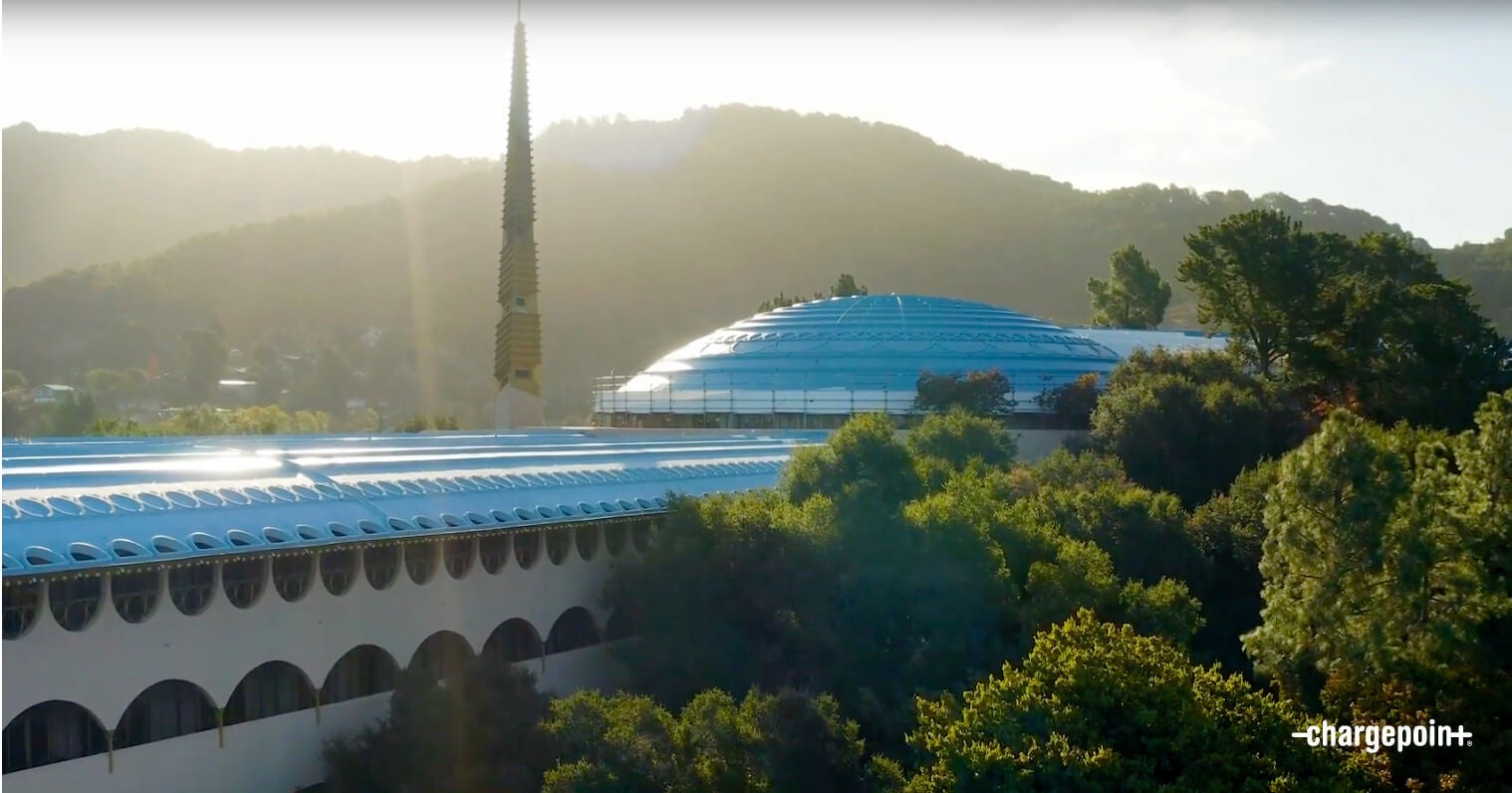 Marin County, California is no stranger to firsts. It leads the nation in percentage of college graduates, has the lowest unemployment rate in California and its citizens boast the longest life expectancy in the country. Never one to rest on its laurels, the county now has its sights set on becoming a global leader in sustainability. That’s a tall order, especially in California, which has the most ambitious climate action plan in the U.S. by far, with a goal to reduce greenhouse gas (GHG) emissions 30% below 1990 levels by 2030. That commitment requires a massive shift away from traditional gas-powered cars to zero-emission electric vehicles (ZEVs)—exactly the kind of challenge Marin County relishes.

County leaders realized early on the only way to help achieve the state’s objective was to make it as easy as possible for its residents to drive electric. Since 2011, Marin County has worked with ChargePoint to make e-mobility accessible throughout the region. We recently chatted with Marin County’s Principal Sustainability Planner, Dana Armanino, about implementing ChargePoint® solutions, what the process entailed and how the county was able to offset much of the cost through incentives. 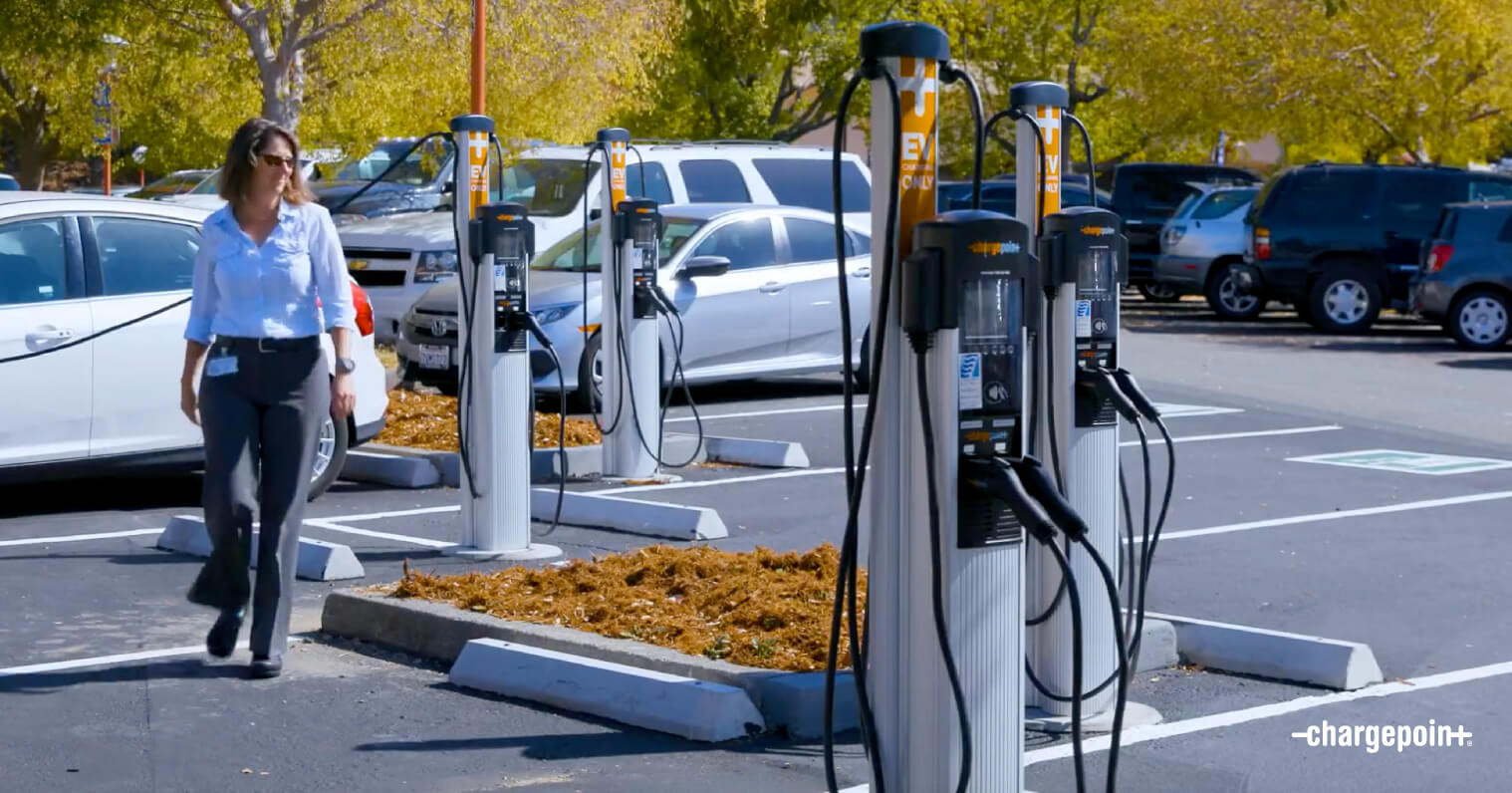 Size: 2,000+ employees located at 35 locations across the county 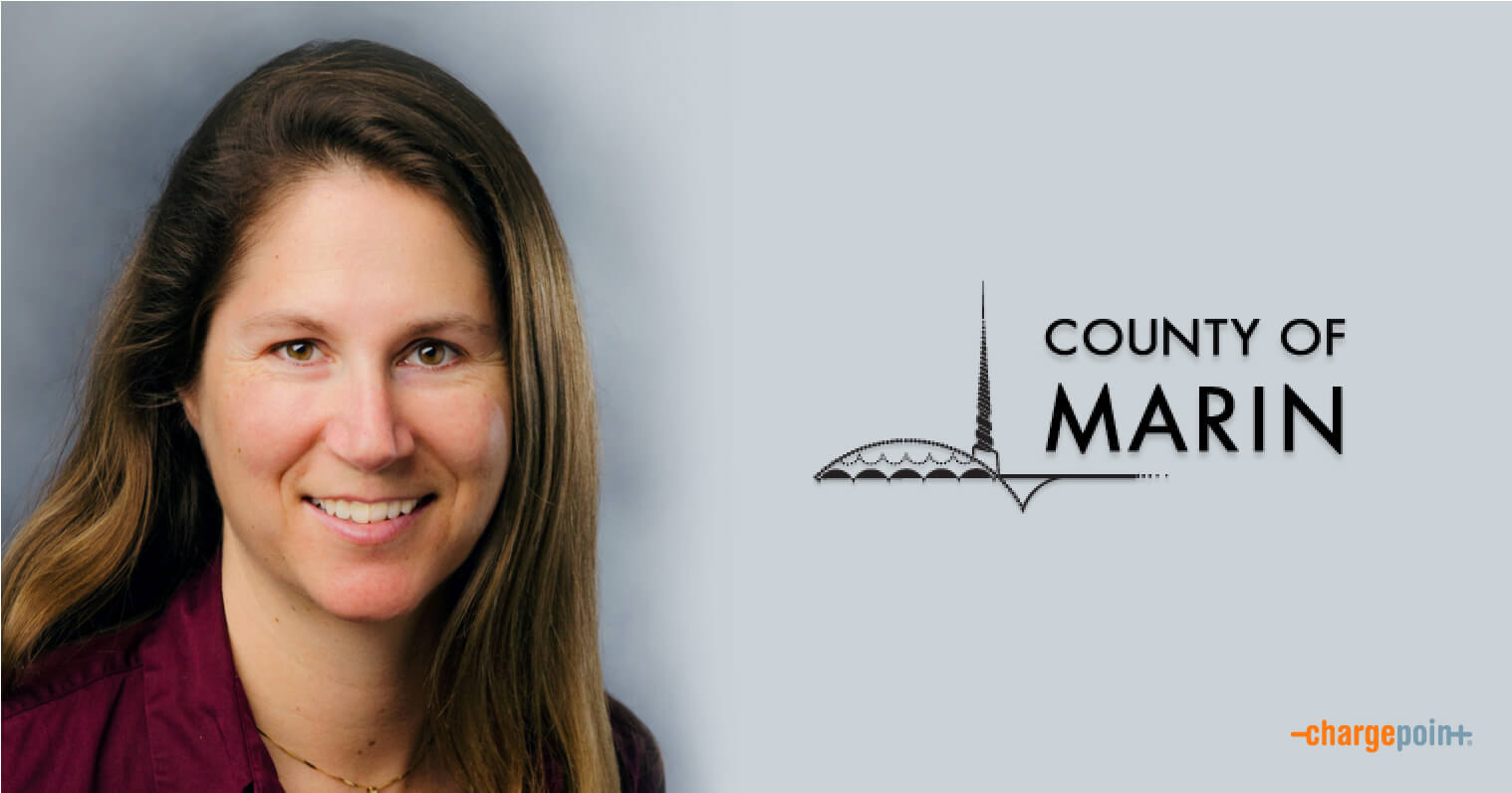 “The ChargePoint platform is very user friendly and customizable which allows our staff to set pricing to match different user groups such as fleet vehicles, employees and the general public. Additionally, ChargePoint is a large network that is recognized by many EV drivers.” –  Dana Armanino, Principal Sustainability Planner, Marin County

Tell me about yourself and your role at Marin County.

I am a Principal Sustainability Planner with the Marin County Community Development Agency, and have been working here since 2003. I supervise the County’s Sustainability Team, which works to track, manage and implement measures from the County’s Climate Action Plan, including efforts to reduce emissions from our built environment and from transportation throughout the County.

Do you drive an EV yourself?

Of course! I drive a Chevy Bolt. I initially leased a BMW i3 starting in early 2015 but when that lease ended I switched over to a Chevy Bolt because the range eliminated all range anxiety. I can do a round trip between Marin County and Sacramento or anywhere in the Bay Area and still have plenty of charge left.

What are Marin County’s sustainability goals, and how does EV charging fit into this?

The County of Marin adopted its first Greenhouse Gas Reduction Plan in 2006, which contained a goal of reducing Marin’s community emissions to 15% below 1990 levels by 2020. That goal was achieved in 2012 so an updated Climate Action Plan was adopted in 2015, which included an updated goal of reducing emissions to 30% below 1990 levels by 2020. Additionally, the Marin County Board of Supervisors adopted a resolution in 2017 launching the County’s Drawdown: Marin effort – a bold, community-driven campaign to do our part to reduce greenhouse gas emissions and prepare for climate change impacts.

We had a strong desire to invest in EV infrastructure for years as an emissions reduction strategy and to importantly support our community’s interest in EV technology. The more we can deploy the units, the more we can educate people and get them comfortable with the idea of owning electric vehicles.

Additionally, the County owns and operates a fleet of seven pure EVs that includes a Nissan Leaf and six Chevy Bolts, and five Plug-in EVs that include two Chevy Volts and three Ford Fusion Energis. We also have 74 hybrid vehicles of various makes/models. Later this spring, the County will be adding two more Chevy Bolts and five more hybrids. These will replace standard gas vehicles.

How did you hear about ChargePoint?

Who was involved in the decision-making and implementation process?

As far as implementation, we worked together with various groups from PG&E EVCN program staff and contractors, ChargePoint staff, County Public Works, Parks and Sustainability staff.

The review of potential charging stations is a collaborative process between the Sustainability Team and the Department of Public Works. Public Works provides site evaluations and cost estimates while the Sustainability Team aids in identifying funding resources and evaluating financial viability of the project. Ultimately, if a project if deemed viable, the proposal is brought to the Board of Supervisors for final approval.

What were the most important criteria for evaluating different options?

What did you see as strengths and weaknesses of our product versus other EV charging vendors?

The ChargePoint platform is very user friendly and customizable which allows our staff to set pricing to match different user groups such as fleet vehicles, employees and the general public. Additionally, ChargePoint is a large network that is recognized by many EV drivers. 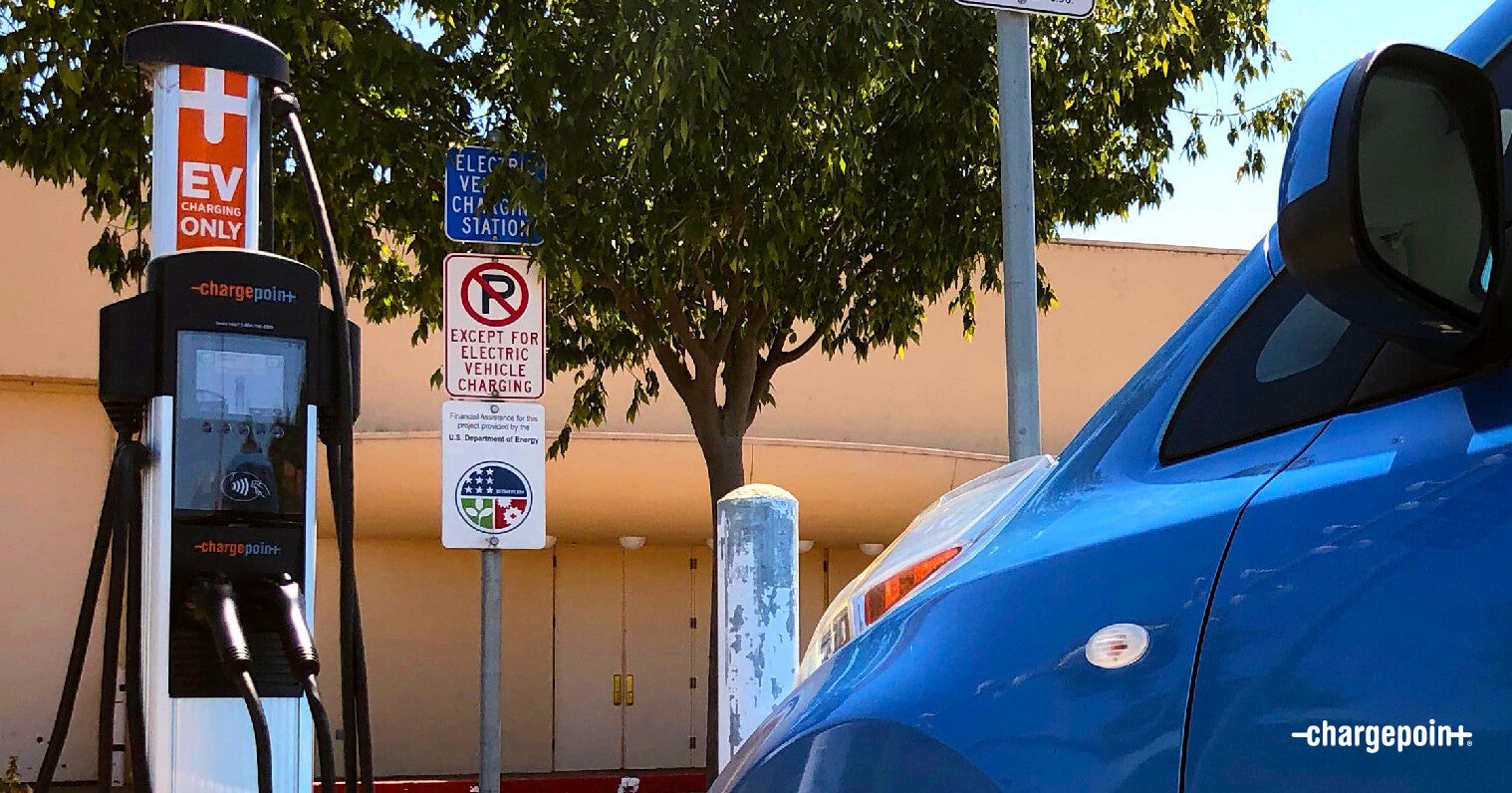 Can you describe any of the cost savings associated with incentives or grants?

For the County’s latest project involving the installation of 31 public and 16 fleet charging ports, we were able to obtain several grants that offset the bulk of the cost. The electrical and site improvements were covered via the PG&E EV Charge Network program. With that program, the County was responsible for the units themselves and their installation. We obtained equipment rebates from PG&E, Bay Area Air Quality Management District, Transportation Authority of Marin and MCE Clean Energy.

Were there any organizational or infrastructure challenges you had to overcome?

We had previously evaluated our Civic Center campus as a site for adding charging stations. We already had 4 ports available, but demand was already increasing such that more were needed. Unfortunately, our Public Works staff identified several electrical constraints that would have required significant costly upgrades to complete such a project. However, once the EVCN program launched the offer of cost coverage for electrical upgrades, the project became viable again.

How would you describe the overall process?

The overall process was very straightforward and generally easy – especially for a large construction project such as this. We did experience an issue where one of the units arrived damaged which was not discovered until it was installed. ChargePoint was very helpful and responsive in getting a new one shipped out to replace it.

How are you using the stations? What aspects do you rely on the most?

We use the stations to charge the various EVs in our fleet as well as provide convenient charging for our employees and the visitors of the Civic Center campus.

With ChargePoint cloud services, what features and analytics do you rely on most?

We are also tracking station usage over time as it is required for some of our grants. The functionality of being able to filter by station name and driver group is especially helpful.

Other analytics that we look at include greenhouse gas emissions avoided, unique drivers which tells us how many different people are using the stations each month, number of charging sessions delivered and energy delivered.

What has been your experience with the ChargePoint team?

We have called into the ChargePoint support team several times as we were bringing the new units online and setting up the new pricing structures. They were extremely helpful and responsive walking us through the processes and answering all of our questions. Now the that units are up and running we have had less need to call for technical support – which is great! But it is nice knowing that they are just a call away if we need them.

ACT Expo 2022: The year of the electric fleet vehicle