Home > You’ve Made the Smart Decision to Go Electric > 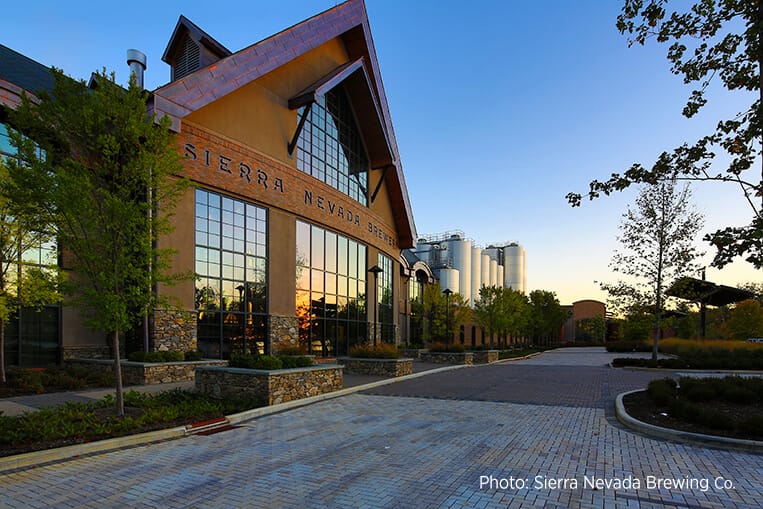 Sierra Nevada Brewing has been at the forefront of sustainability since its humble beginnings four decades ago. Founded in 1979 by homebrewer Ken Grossman and built with recycled dairy equipment, the company has grown to become the third largest craft brewery in the nation and the seventh biggest overall. Named for the majestic mountains near Grossman’s Chico, California home, Sierra Nevada has never wavered from its original ethos to “reduce, reuse and recycle.” That now-legendary commitment to the environment led it to become an early adopter of electric vehicle (EV) charging technology in 2009, back before there was even a single mass-market EV on the road. Sierra Nevada Brewing Co. chose ChargePoint for its employee and public EV charging solutions. In fact, they were ChargePoint’s very first retail customer. More than ten years later, that relationship is stronger than ever.

Sierra Nevada Brewing Co. has been called “the most perfect brewery on the planet.” That comes not only from loyalists who have been enjoying the company’s signature Pale Ale for decades, but from Michael Lewis, an emeritus professor at the University of California Davis and co-author of Brewing, a book many consider to be the Bible of beer science. Lewis credits that perfection to the company’s commitment to “quality and integrity.” While the quality shines through in all of Sierra Nevada Brewing’s beers, its integrity is due largely to its trend-setting dedication to sustainability, a hallmark of the brand from day one.

“Ken [Grossman] has that ability to look ahead and think long term,” says Mandi McKay, Sierra Nevada’s Sustainability Manager who’s been with the company for the past 11 years. “He saw the future and thought, ‘if there’s going to be a place to charge in Chico, it may as well be here at the brewery.’” The original two ChargePoint Level 2 chargers sat idle for nearly two years, says McKay. “We didn't have any employees with an EV and there were very few people even driving electric cars back then,” she says. That all changed when Grossman himself purchased a Nissan LEAF EV. Since then, demand for charging has grown—and continues to grow—from employees and customers alike. The company recently added a ChargePoint DC fast charger in Chico and two more employee-only Level 2 chargers at its new Mills River, North Carolina brewery. Today, two Nissan LEAF’s and a Chevy Volt are part of the Chico brewery’s daily operations.

" It's been great working with ChargePoint. The technology and people have been fantastic. "

A Force for Nature

“We’re leveraging our voice and the power of our company to advocate for the things that align with our values,” she says. “We've done a lot of really great work internally on operational efficiencies and onsite energy generation, but we're ready to take it to the next level.” That internal work includes a 2.5-megawatt solar array (generating more than 20% of Sierra Nevada’s power at its Chico headquarters), CO2 recovery, heat reuse, zero waste and, of course EV charging. It’s probably no surprise that the Mills River, NC facility is also the first LEED® Platinum certified production brewery in the US. The company hopes that by amplifying its sustainability efforts it will inspire other organizations to do the same, she says.

Just as Sierra Nevada Brewing Co. helped turned craft brewing into a global phenomenon by combining the best ingredients with a passion for the planet, ChargePoint has become the world’s leading charging network by pairing a relentless pursuit of quality with an eye toward a sustainable future. It’s fitting then that, today, the two companies are working together to start a new revolution—this one in electric mobility. “Because we were such an early adopter, we've been able to grow up with ChargePoint,” says McKay. “ChargePoint is the leader and the most well respected and we’ve had such success, that’s why we chose ChargePoint chargers for the North Carolina brewery,” she says. “We also participated in the I-5 Corridor Program to get the ChargePoint DC fast charger and that was a great experience as well.”

" Because we were such an early adopter, we've been able to grow up with ChargePoint. ChargePoint is the leader and the most well respected and we’ve had such success. "

What does the future hold for Sierra Nevada Brewing? McKay says there are plans to add another solar installation in Chico as well as looking to increase battery storage at both locations to push its onsite energy generation even more. “It won’t quite get us to 100%,” she says, “but it will certainly get us closer.” In terms of EVs, McKay says the company is thinking big—big rigs that is. “Electrified freight trucks for our fleet is something we’re going to look at pretty seriously in the future,” she says. Sierra Nevada Brewing Co. also has big plans to become an even stronger force for action on climate change and renewable energy moving forward, says McKay. “I feel really fortunate to work for a company that is led by a family and CEO who genuinely understand sustainability and the impact that it has in business and in the world,” she says. Even better, they make great beer.