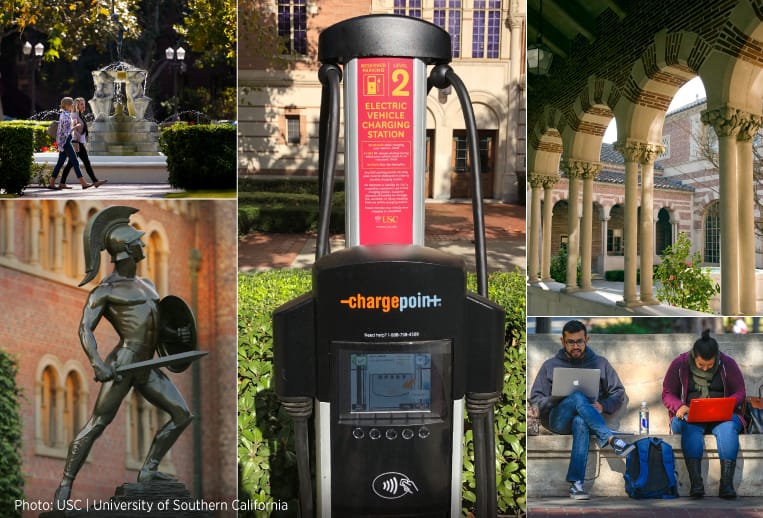 The University of Southern California (USC) is the oldest private research university in the state. When its campus first opened in Los Angeles in 1880, USC had just 53 students. Enrollment has grown to more than 48,000 today. Because of its location in the nexus of the entertainment world, it’s no surprise USC has produced more than its fair share of celebrities. Star-studded alumni include esteemed film directors George Lucas, Judd Apatow and Ron Howard, as well acting legends Laura Dern and Forest Whitaker, among many others.

USC consistently ranks among the best universities in the country. It is also a world leader in engagement. Students can participate in over 1,000 on-campus groups, including nearly a dozen devoted to sustainability. One way the school is putting that engagement into action is by offering electric vehicle (EV) charging on campus, says USC’s Associate Director of Transportation, David Donovan. “It was students clamoring for green solutions” that first convinced USC to install EV charging stations back in 2014, he says. Today, there are 129 ChargePoint Level 2 ports between their two main campuses available for student, faculty, staff, and public use, as well as a pair of DC fast chargers. With demand on the rise, the university is in the process of almost doubling that number of ports in the coming year.

" We didn't want to go with a small company that might not be around in 10 years. We wanted somebody with significant market share and an excellent reputation, who we knew was going to be around for the long term. ChargePoint was the obvious choice. " 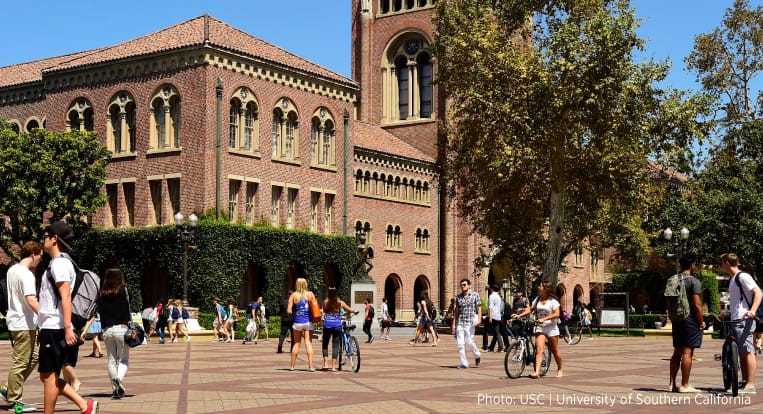 The Problem. “When we first started, we honestly had no idea how to correctly price this new offering,” says Donovan. “We made a lot of mistakes. Our original pricing model was set at just 25 cents per hour. This is was effectively free and caused a lot of issues, because anybody who had an EV would say, ‘If I want to park today for eight hours, I've only got to pay two extra bucks, which is fine,’” he says. Because there were a limited number of charging ports and people remained parked at the stations long after they’d finished charging, it began to cause a lot of frustration with other EV drivers looking for a place to charge, he says.

The Solution. “I love working with the EV population on campus,” says Donovan. “They were the ones who came back to us saying we needed to revise our pricing policy. We worked closely with ChargePoint to figure out what we should really be doing, and what made sense for our constituents. We changed our pricing to start charging by the kilowatt hour instead, and now we're really accurately capturing use.” The University’s current pricing plan is 25 cents per kilowatt hour (kWh) while actively charging, followed by a 90-minute free grace period during which people can move their car. After that, a flat fee of $3 per hour kicks in as a motivator for people to relocate. The new plan has worked wonders—while it’s still relatively inexpensive to charge, people are now incentivized to move their cars, says Donovan. “Surprisingly, I have not heard one complaint since the new pricing policy went in. Everybody loves it.”

“As our charging demand grew, we wanted to eliminate older stations and choose a single provider. A huge part of our decision to go with ChargePoint was the dashboard,” he says. It allows him to set up unique driver groups and easily monitor the stations, which are located across both of USC’s main campuses at University Park next to the LA Coliseum, and the Health Sciences Campus in East Los Angeles. ChargePoint’s advanced reporting features let Donovan see utilization and help the university meet federal and state reporting requirements for sustainability, among many other advanced features that are only possible with a smart, networked solution. “I love logging into my ChargePoint account,” he says. “I use the reporting all the time.” The third part of what Donovan refers to as a “trifecta” is the company’s service. “ChargePoint has been phenomenal in terms of customer support,” he says. “From notifying me when stations are down, to assisting with specific reporting requirements, the CS teams have always been fantastic.”

" ChargePoint has been phenomenal in terms of customer support, from notifying me when stations are down to assisting with specific reporting requirements, the customer service teams have always been fantastic. "

“I came to USC as an undergraduate student in 1988, and I just never left,” says Donovan, who began working for USC shortly before graduation in the early ‘90s. He’s been with the university’s transportation department for the past eight years. That kind of next-level commitment is not uncommon at USC, which boasts an unusually passionate alumni network of 400,000+ former Trojans. Perhaps one reason for that loyalty is the school’s competitive admissions requirements. Only around 13% of applicants make the cut, placing USC among the most discriminating colleges in the nation.

But when it came to the selection of an EV charging partner there really was no competition, says Donovan. ChargePoint’s industry-leading network and longevity made it the clear choice, he says. “We didn't want to go with a small company that might not be around in 10 years. We wanted somebody with significant market share and an excellent reputation, who we knew was going to be around for the long term. ChargePoint was the obvious choice.”