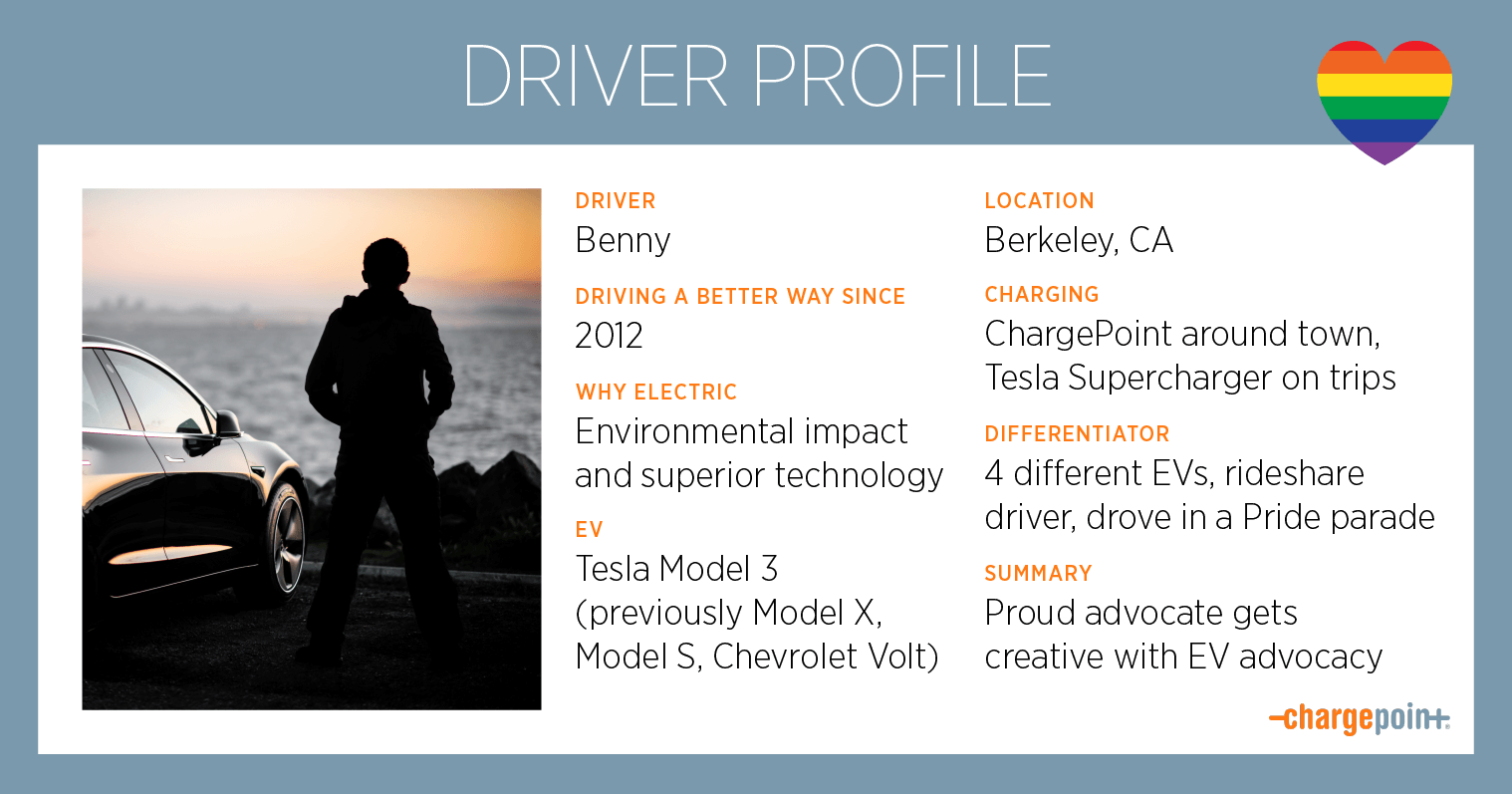 Anchors aweigh! Benny is a Navy veteran pursuing his MBA at the Haas School of Business at UC Berkeley. He's been driving electric for seven years and loves being an EV advocate. He shared his journey with us, from Chevrolet Volt to Tesla Model 3 (his third Tesla!) and from East Coast to West Coast. Read on to learn how this business student advocates for electric mobility.

Hi Benny! Tell us about your EV journey.

I grew up in southeast Houston near the world’s largest agglomeration of oil refineries. Heavy air pollution from these refineries taught me early on the folly of relying on petroleum for our energy, and sparked my interest in sustainable alternatives. With transportation at the center of our oil addiction, I saw EVs as the solution.

My passion for EVs started when GM launched the EV1 in 1996. What looked like a new beginning was unceremoniously shelved soon thereafter. Electric mobility felt like a lost cause for a while, but times eventually changed. I remember watching Michael Phelps during the 2008 Olympics and seeing the first Chevrolet Volt commercial. I got a first-generation Volt in 2012, then upgraded to a Tesla Model S in 2014 (and Model X in 2017) to drive on Uber and Lyft while stationed in Washington, DC.

As a rideshare driver in DC, I had many conversations about EVs with influential people, including Capitol Hill staffers, law firm partners, and even diplomats or members of Congress. I definitely convinced some to go electric. Politically connected people are magnifiers: when they go electric, others pay attention. Focusing on these influencers can help spread the word. 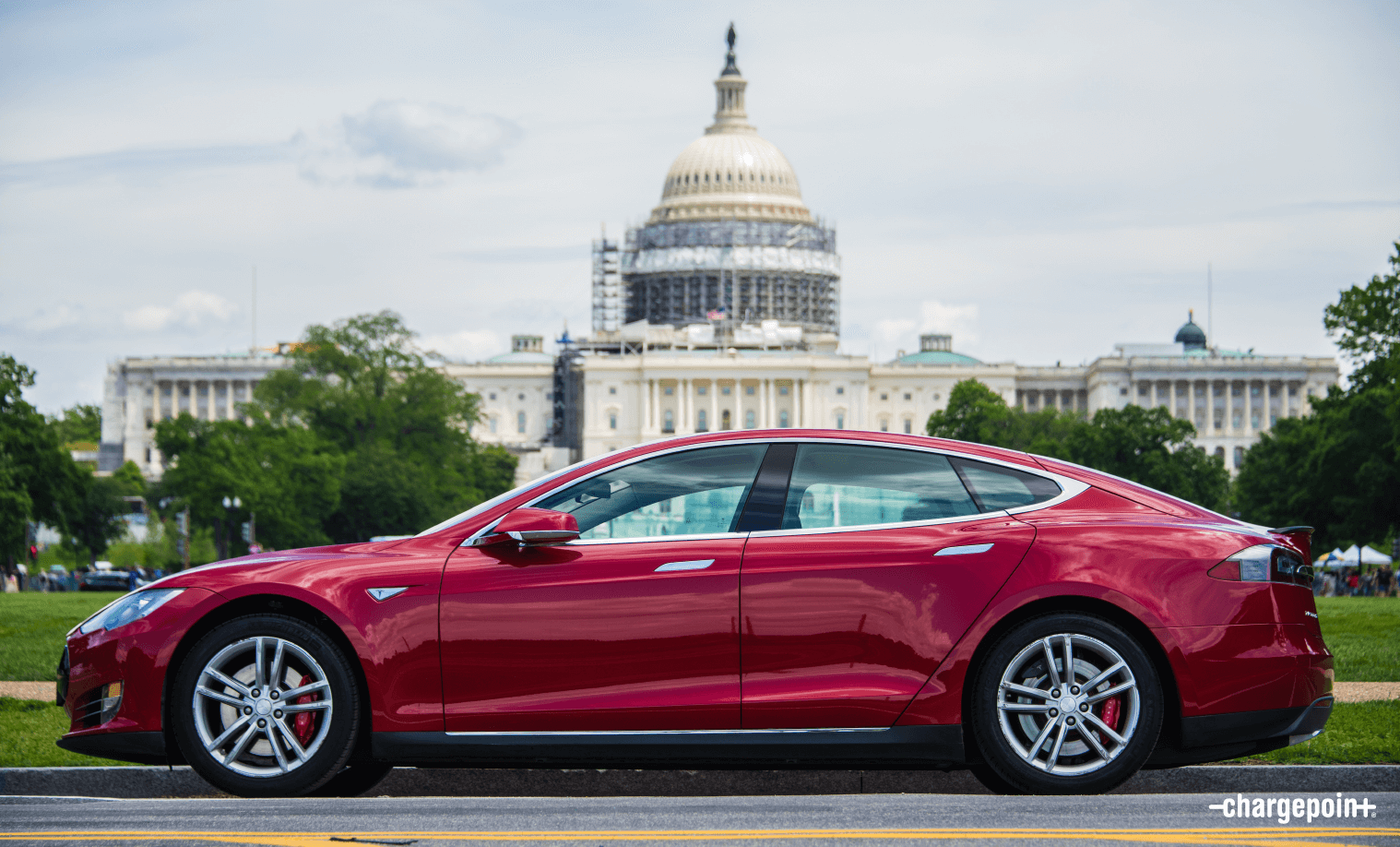 One year, I drove in the Capital Pride Parade, representing Uber and EVs in front of 250,000 people. It was the first time I wore a tutu in public. We got a great reception, though that might have been the carload of swag I tossed. I also participated in Department of Energy Earth Day Expos, serving as a voice of the EV community and educating hundreds of expo attendees, including young students.

Now I’m in California with a Model 3. It’s breathtaking how much Tesla has innovated in such a short time—I think they evolve more like a tech company than a car company. As an MBA candidate at Berkeley Haas, I look forward to connecting my personal passion for EVs with my professional endeavors.

How have you seen the general understanding of EVs evolve over time?

I drove 15,000 passengers in EVs. When I started in summer 2014, most people didn't know anything about EVs, and many had a mental image of glorified golf carts. Most didn’t know about the Tesla brand or that mass-produced EVs even existed. I spent a lot of time crushing misconceptions such as "charging must be hard" or "does the battery die on you?" (It's not and it doesn't!) For the people who doubted EVs could be fast, I would floor the accelerator and go from zero to 60 mph in four seconds.

The peculiarities of the Model S (like the retractable door handles and large touch screen) were a great conversation starter that allowed me to explain electric mobility to a captive audience: reduced emissions, reduced maintenance, reduced fuel costs and superb performance. Many passengers enthusiastically shared their revelatory Tesla experiences on social media, everywhere from Instagram to Reddit, likely reaching hundreds of thousands of viewers.

Awareness of EVs has increased dramatically since 2014. By 2018, most of my passengers (and people in general) in DC were aware of Tesla and EVs. I’m proud of the role my advocacy played in this transition.

I spent a lot of time crushing misconceptions [at first] ... awareness of EVs has increased dramatically since 2014.

How do you charge?

As an apartment dweller, I rely heavily on public ChargePoint stations. I charged my Volt using a wall outlet, but when I transitioned from a plug-in hybrid to all electric, a wall outlet was no longer enough.

Fortunately, I lived near several ChargePoint stations in DC. I would plug in, take my (electric!) scooter out of the Tesla's front trunk ("frunk") and zip home in a minute while the car charged. Since moving to California, I still charge with ChargePoint, either at a curbside station by my apartment or at the UC Berkeley garage on school days. It's not free, but it's much cheaper than gas.

When I transitioned from a plug-in hybrid to all-electric, a wall outlet was no longer enough. Fortunately, I lived near several ChargePoint chargers in DC.

Have you taken any EV road trips?

In 2014 over the holidays, I drove from DC to Miami (and back, of course!) in my Model S. Tesla had just started building Superchargers at the time, and the I-95 corridor was one of the first completed. It was exciting to charge 200 miles in 40 minutes, less time than it took to eat lunch. I enjoyed the trip and look forward to making more. 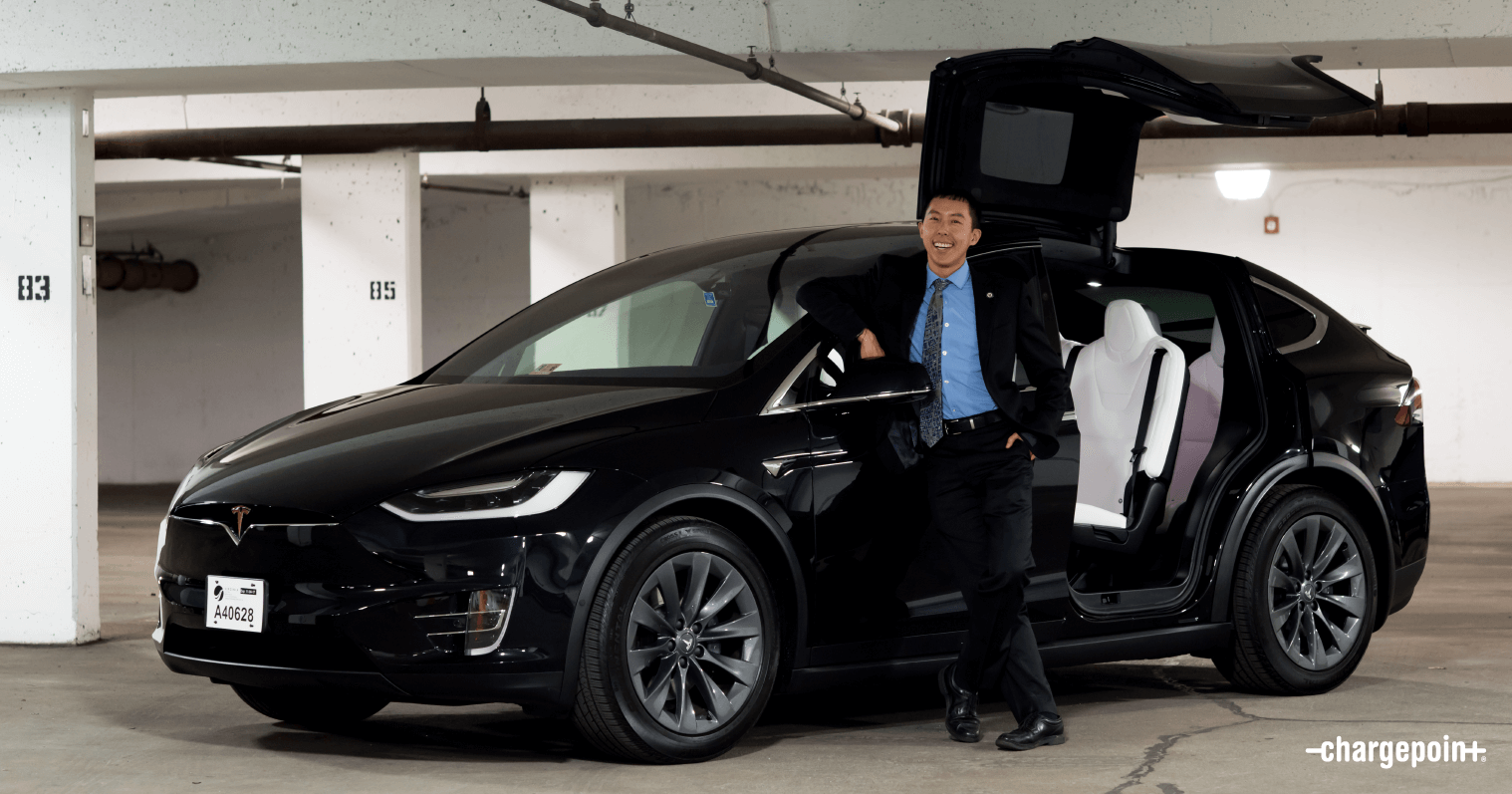 Electric cars are incredibly responsive! Instant torque is so fantastic, every gas car now feels like a letdown. I also love the lack of required maintenance. I’ve driven over 100,000 electric miles and only had to change windshield wipers and tires.

In addition, the environmental benefits are wonderful. EVs produce zero local pollution, eliminating a leading source of ozone and smog. Some people think EVs are just as dirty as gas cars because power plants are dirty. This is false: coal only produces a quarter of American electricity nowadays, and renewables are growing rapidly. EVs are the only cars that get cleaner over time.

I've driven over 100,000 electric miles and only had to change windshield wipers and tires... EVs are the only cars that get cleaner over time.

What's next for you?

I'm committed to making sustainable transportation central to my career. Berkeley Haas has robust cleantech and mobility communities, and a terrific symbiotic relationship with local employers. I'm excited to play a part in the future of electric mobility.